The Detroit Red Wings acquired a fourth-round pick in a three team trade on Saturday, acting as a middle-man to retain salary on behalf of the Columbus Blue Jackets and Tampa Bay Lightning.

However, even that is somewhat overstated, as Lashoff was immediately re-assigned by the Lightning back to the Grand Rapids Griffins.  As such, he remains with the Detroit organization but cannot be called up to the Red Wings.

This is Detroit’s second retained-salary transaction in as many days.  They retained half of Patrik Nemeth’s salary when trading him to the Colorado Avalanche.

Given that teams can only have three players with retained salary on the books, this seems to limit the Red Wings’ options heading into the trade deadline, as they’ll only be able to do that once more.

I think this means that there isn’t much of a market for Detroit’s trade chips, as the Red Wings would almost certainly need to retain salary to move Jonathan Bernier, Marc Staal, or maybe even Luke Glendening.

That the Wings are using up all their salary retention slots to stock up on fourth rounders is probably a sign of a bad market for their trade chips.

The Red Wings acquired Marc Staal from the Rangers on Saturday, taking on his salary cap hit and getting paid a second-round pick to do so. 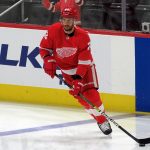 The Red Wings traded defenseman Patrik Nemeth to the Avalanche on Friday night.

The Red Wings will pick fourth, having been passed by three teams in the NHL’s Draft Lottery.