The Red Wings’ 2021 campaign wrapped up on Saturday night in Columbus, a 5-4 overtime loss to the  Blue Jackets.

With that, the strangest season on record ended with perhaps the most predictable result.  The Red Wings having slightly improved, still finishing in the bottom third of the league, still missing the playoffs.

While the team was competitive on many nights, which was good to see, there still wasn’t a lot to be excited about over the season.

Oh, sure, it was good to see Thomas Greiss right himself after a slow start, giving the Red Wings two solid goalies after spending the 2019-20 campaign with only Jonathan Bernier able to win.

Michael Rasmussen took a big step forward in his development.  Adam Erne – mostly due to one very hot streak – matched a career high in points despite the shortened schedule.  Filip Zadina put up 20 points in a top-six role.

These are all good things.  But they’re small steps forward.  They’re necessary for the rebuild that the Red Wings are going through.  Perhaps more importantly, for the most part, they were expected.  And as I said off the top, this team did what was predicted.

Dealing Mantha, who – while only 26 – is at the older end of Detroit’s rebuild core, makes a lot of sense.  Especially when the return is considered.  Richard Panik is a throw-in for salary considerations but the younger Jakub Vrana put up a point per game once coming to Detroit, plus a first- and second-rounder.  That’s a lot of options for the continuing rebuild.

But the Mantha deal was the lone bit of meaningful excitement from the season.  Yes, Vrana’s four-goal night was fun to watch, as was Sam Gagner‘s hat trick, but what impact did those performances have on the season as a whole?  Little, if any.

The season always had a “lets get through this and see what we can do when we come out the other side” feel to it.  And now we’re on the other side.

It would appear that the coaching question will be answered first.  Jeff Blashill‘s contract is up.  The Wings haven’t performed well under him but he hasn’t exactly had much to work with, either.  I can see Yzerman bringing him back and I can also see him bringing someone else in.  It really depends on whether Yzerman thinks any of the other coaches available would do better under the circumstances.

I’m not sure they would.  So, right now, my guess is that Blashill is back on a short-term deal.  Perhaps with a revamped coaching staff surrounding him.

After the coaching question is answered will come the expansion draft, as I’m assuming the Red Wings won’t move to lock up any of their unrestricted free agents if it means expending an expansion draft protection slot on them.  There are lots of ways Detroit could go in their protection strategy but, of note, I expect to see Evgeny Svechnikov and one of Dennis Cholowski or Gustav Lindstrom made available.  Richard Panik will be available.

Like Vegas – who selected Tomas Nosek from Detroit – before them, Seattle will be picking from kids who haven’t fully cracked the lineup yet and overpriced veterans.  I would love to see them take Panik off of Detroit’s hands but I don’t see it happening.  I could see them taking Givani Smith in the same vein as the Golden Knights’ pick of Nosek.  My expectation, though, is that they’ll swing for the fences and take Svechnikov, hoping they can give him the opportunity the Wings never seemed to be able to.

Either way, whoever the Kraken take from Detroit, it’s likely to be someone who would be disappointing to lose but whose departure doesn’t drastically impact the rebuild.

Beyond the expansion draft is free agency, which is so far away that I’m not going to bother trying to predict anything.  That, though, is where we’ll see if we should expect more of the same next year, as the new Wings’ roster is assembled. 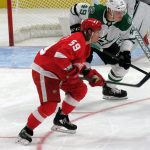 Thoughts on the Red Wings’ 2021 Roster