The Detroit Red Wings acquired defenseman Nick Leddy from the New York Islanders on Friday, in exchange for forward Richard Panik and a second-round pick in the 2021 NHL Entry Draft.

Detroit also retains 50% of Panik’s salary, $1.375 million for the next two seasons.

This deal doesn’t make sense to me.

Leddy is probably an upgrade over some of Detroit’s defensemen from last season, sure.  But to take on his salary, retain half of Panik’s salary, and throw in a second-round draft pick to make that upgrade seems like a steep price to pay.

Additionally, by completing the trade now, the Red Wings pretty much have to protect Leddy over Troy Stetcher for the Seattle Kraken expansion draft.  Stetcher was not one of the defensemen Leddy would be an upgrade over, so add the risk of losing Stetcher to the cost paid for Leddy and I really don’t get it.

Sure, there’s the “They’ll get a first-rounder for Leddy at the next trade deadline” argument but, as I’ve written before, we go into every season with some player who for sure will be flipped for a high pick at the deadline and it never happens, so we should probably stop being so sure about that.  Additionally, if the Wings do lose Stetcher to Seattle, the cost includes a guy they probably could have flipped for a second-rounder.

One thing I haven’t touched on is giving up Richard Panik.  I said when he was acquired that I don’t like him, he did nothing to endear himself to me in his short tenure with Detroit, and I don’t see a negative to his departure.

I don’t get the timing on this move and I don’t get the cost.  Maybe there’s something else coming but as it is right now, this looks like a really bad deal to me. 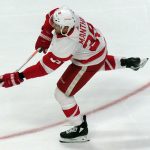 The Red Wings dealt Anthony Mantha to the Washington Capitals at the NHL’s trade deadline on Monday.

The Red Wings acquired a fourth-round draft pick from Tampa Bay by retaining salary in a three-team set of deals on Saturday.