There’s no shortage of praise for Detroit Red Wings general manager Steve Yzerman and what he has been able to do at the NHL Draft. He’s made some huge steals and moves that upset the expert rankings. In the 2021 offseason, he took Sebastian Cossa of the Edmonton Oil Kings 15th overall instead of Jesper Wallstedt of Lulea. Before that pick, Yzerman selected Simon Edvinsson 6th overall, though he wasn’t expected to be selected that high. There were many opinions about who those picks should have been.

However, many were confident in Lucas Raymond when he was selected. At fourth overall, everyone knew that he was going to bring something unique to the Red Wings. He’s a very skilled winger who can play both ends of the ice well. He works extremely hard, and his speed and high hockey IQ are huge advantages. Some viewed him as a top-five pick in the draft, and that’s where he went.

Moritz Seider is almost a lock to make the roster this season. He’s a defenseman, and that’s where the Red Wings need some help. Raymond’s path to the NHL is going to be a little more complicated, and even when he makes it, he’s going to have to prove himself in the top-six. However, he’s well on his way, judging from his performance in the Traverse City prospect showcase and preseason games.

For many fans, the official start of the season is the prospect showcases. There was action everywhere, with the Arizona Coyotes playing the Colorado Avalanche in the desert and the Red Wings playing the Columbus Blue Jackets in Traverse City.

Fans were anxious to see which players would contend for a roster spot. In Detroit, it was Jonatan Berggren and Raymond. Raymond, in particular, started solid, scoring three goals in two games, one against the Dallas Stars in the first game and two against the St. Louis Blues that were absolute snipes: 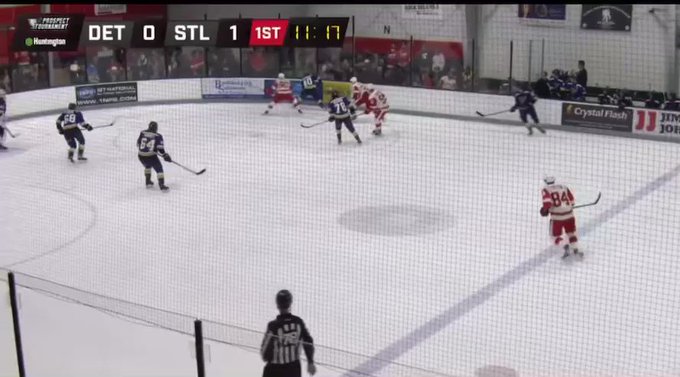 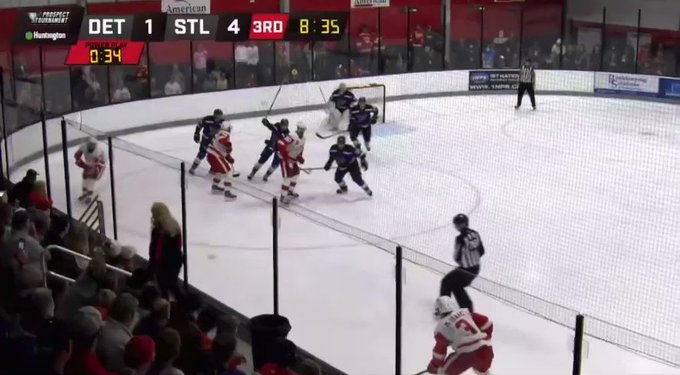 He finished with three goals in three games. Some might say that it’s easy to get overly excited considering the level of talent he was playing against, but nothing changed when training camp started. With the NHL season approaching, preseason competition has ramped up, and full-time NHLers want to get their warm-up reps in game fashion. There is still a lot to like about Raymond in the short span we’ve seen him play.

Raymond’s excitement to play in his first preseason game with the Red Wings was evident, as he scored an excellent goal that resulted from picking up the puck in the slot and shooting it over the goalie’s shoulder. 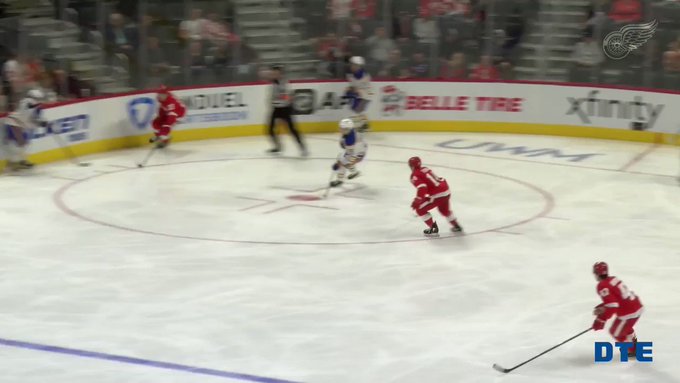 Robby Fabbri, Raymond, and Pius Suter’s line combined for seven points in the game, and they were by far the best line on the ice. However, that isn’t what interested me the most. Instead, it was captain Dylan Larkin and another young player looking to prove his worth, Filip Zadina, who played alongside him.

Related: 5 Takeaways from the Red Wings’ Red vs. White Scrimmage

They looked good, and Larkin had a solid game. He scored three points, including two goals, one thanks to an excellent seam pass from Raymond. 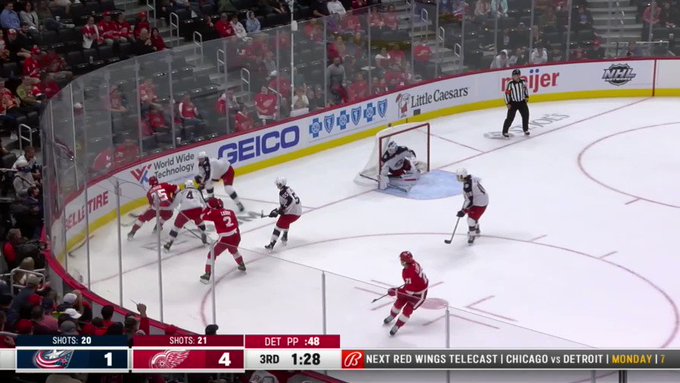 His only assist came on this beautiful power-play goal thanks to another excellent cross-ice pass from Raymond. 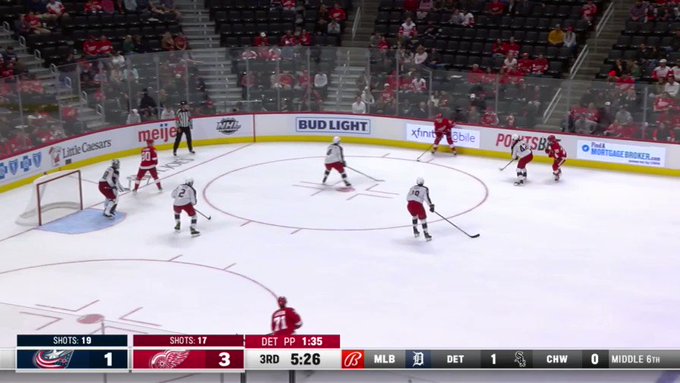 Larkin’s incredible night came on the back of an equally fantastic night from the kid trying to prove himself to management. He’s playing with a fire lit under him, evident by how aggressive he is on the puck and the looks that he’s creating. We all knew he was talented. The only real question was whether he could play against NHL-caliber talent. The answer is clearly yes. It’s still the preseason, and most teams haven’t used their full roster. However, there’s enough talent around Raymond to gauge whether or not he’s worthy of a roster spot.

Does Raymond Deserve a Roster Spot

Raymond has four points in two preseason games. However, what stands out to me is how head coach Jeff Blashill is deploying him. He’s being used in the top-six alongside players and leaders like Larkin. He’s being tested to see how well he can produce, and it’s evident that he is confident in his play. With Jakub Vrana out for an extended period due to injury, a roster spot has opened up. Expect Raymond to push for it. If anyone doubts his compete level and ability to show up players using his above-average hockey IQ and ridiculous shot, they have another thing coming.

Raymond needs to be in the NHL to develop any further. He has played in almost every league imaginable and been a standout player in all of them. He looked like a grizzled veteran with lots of experience in the prospect tournament and now in the preseason. While Seider has struggled at times, Raymond has been a consistent motor for a team that seems to be missing it. With skilled players by his side and in a role that will give him the chance to play tons of minutes, he could very quickly become an even bigger offensive threat.

Everyone has a chance to show what they’ve got in training camp, though some players have a greater chance of making the roster than others. However, a fabulous training camp will push any prospect that much further into the spotlight. It’s what happened to Raymond this time around the horn.

Everyone knew that he was one to watch. He was a fourth-overall pick, which comes with big expectations. Although, not everyone knew how well he could process the game and create chances for his teammates, both at even strength and on special teams. There’s no reason he shouldn’t be contending for a spot in the opening night lineup. Raymond has proven himself to be an excellent player against NHL competition, so now we must wait to find out if the Red Wings’ brass believes he can make the roster and if making it out of training camp is a real option.

Jeff is a consistent source for Red Wings and Wild content at The Hockey Writers. He was formerly a member of the Predators writing team, and he enjoys watching all sorts of hockey, from juniors to the pros. Jeff enjoys playing for his high school and local teams in Nashville as well. He’s a big proponent of hockey analytics, and you’ll often see him using lots of statistics and data to back up his main talking points. You can find his work here or check out his contributions on his Substack, Last Word on Hockey, On the Forecheck, and Puck Empire. Lastly, you can listen to him on the Youth Movement Podcast presented by On the Forecheck or the Triple Shift Podcast. For any inquiries about interviews or questions about statistics, analytics, or just general hockey opinions, you can message his Twitter, @jjmid04.